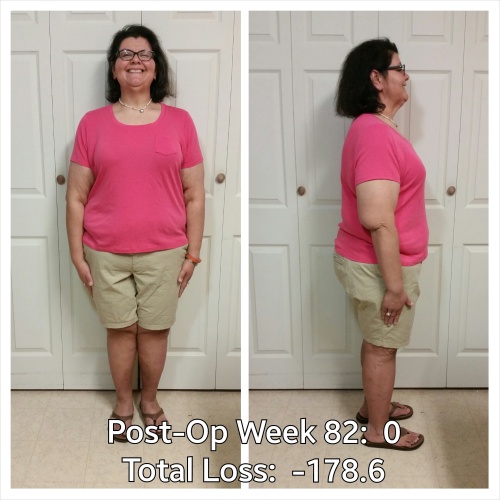 No change this week, and I am more than good with that.  This past week was a bit rough, and I fully expected to be up a lot this week as my week saw me eating so many things I don’t normally eat.  Cookies, brownies…my students brought these things in as part of a class project and I was not strong enough to say no to any of them until the end of the week when I was just flat tired of eating them.  I didn’t want the taste of them in my mouth, and I didn’t like the way they made me feel.  So the fact that the scale didn’t budge this week is actually a relief to me.  It could have been much, much worse.
The upcoming week looks to be equally difficult.  The stress I anticipate this week is really eating at me (no pun intended, really!) and has me in deep thought.  I have had a few sleepless nights just thinking about a complex situation that I have to intervene in, and I am having to plan very carefully how to do what I have to do such that some valuable relationships I have don’t sustain any damage.  I know that’s really vague, but I can’t really give any details here.

No worries about me and my husband, though…we are solid.  It’s work related.  I just have to remember not to self-medicate my feelings of frustration and worry with food.  I’ve got protein-heavy snacks around and am preparing a similar lunch to the one I had last week, which was really good.  I’ve got this week’s breakfast in the oven as well so I’m good there.  And dinners…dinners are a bit trickier, as this week, I’ll be eating dinner out 3 of 5 nights this week.   Just have to remember to make smart choices where I end up going.

I’m still trying to find the motivation to work out, and I’m not feeling it.  I will be so glad when winter takes its leave here in about 6 weeks, because I slip into the worst funks in the winter time.  I thrive on sunlight and warmth, neither of which are ever in abundance during the season around these parts.  I am glad to have closed out January by losing what I gained during the holidays and am hopeful that I can lose at least 5 more during February.  That is the goal, anyway.  Just gotta keep on moving, logging my food, taking my vitamins, and measuring portions.

I did finally cut my hair, because the ends were splitting and dried.  It was incredibly unhealthy, and I couldn’t do anything with it.  So I had my hairdresser lop off 4 inches, and I feel so much better!  I think this length is one I’ll stick with because it’s long enough that I can still put it up if I want to, but short enough that my hair won’t get caught in my car door or purse straps. 🙂

Most importantly, I need to keep listening to my body and feed it what it needs rather than what it wants.  This past week I struggled with that, but I’m planning on getting my shit together and letting the fat girl in my head that she’s got better things ahead of her as long as she is patient and doesn’t sacrifice what she wants most for what she wants now.  I lost my holiday regain this past month, and am aiming to lose 5 more pounds before my birthday in March, so here’s to hoping I can accomplish that goal in the next 6 weeks.  I just want to be lighter in July than I am now.  Right now I weigh what I did at my 1-year follow up appointment, which is good, I suppose.  It means I’m maintaining.  But I still want to lose about 30 more pounds, and if I can lose 5 pounds in 6 week chunks, then I’ll hit that goal before the end of the year.  I’d also like to get at least 15 more pounds off before I attempt knee surgery, which I think I will do over the summer as this will give me time to rehab without worrying about missing work, and it will give me time to focus on just rehabbing my knee rather than trying to do that, and work, and be a decent housekeeper, and do all the other stuff that I do.  I have big plans for the summer, and I have to be healthy and able-bodied to execute all of them.

Onward…this week will be a big test of my coping skills as I approach a very stress-filled work week.

One response to “Post-Op Week 82 Progress Report: Even Steven”