No change this week.  I suppose I should be grateful that there wasn’t a gain, but this doesn’t reduce my frustration level any.  If anything, this week’s lack of forward progress frustrates me even more.

I know the path to success is not a straight line, but if you know me then you know that I greatly dislike it when the path I’m on meanders in any way, literally or metaphorically.  And this path I’m on with my weight loss is meandering a lot more than I really want it to.  I’ll keep pressing on, but only because I eventually want to get to MY goal.  I want to get to MY goal more than I want to get to my surgeon’s goal, because his goal for me is a higher weight than I want my body to settle at.  I am pretty sure this is going to take a lot longer than I would like, and that’s what frustrates me most.  I know that I shouldn’t compare myself to other folks.  As humans, I think we’re prone to do this, no matter what situation we find ourselves in because we use it (incorrectly) as a measure of our own progress.  I also know that it was once said that comparison is the thief of joy.

But when everything I have seen and read tells me that I should expect to achieve 70% of my excess weight loss in the first year, and I’m nearly 70% through the year, have only achieved 55% of that EWL, and have only lost a net of 1.8 pounds in my 6th month post-op, what else am I supposed to feel BUT frustration?  Especially when I see others who have similar starting numbers to mine, and who are further along.  How else am I supposed to feel?  I know there are other measures of my progress.  I know that my health has improved.  But for me, it’s that number on the scale that matters most.  To me, numbers matter.

I’ve been told multiple times, multiple ways, by multiple people that I should ignore the scale.  That the scale doesn’t really matter.  That the scale should not give me value or make me feel less valuable because after all it is just a number.  That the scale is a little box of judgment.  But for me, the scale is a measure of progress.  And for me it is the most important measure.  The scientist in me loves data, loves numbers, and that is a part of me I can’t suppress or quiet.  It is who I am.  I am not willing to change something that is the essence of who I am.

But live in my body.  Live in my head for one day.  See what I see when I look in the mirror.  Think the thoughts I think when I step on that scale every Sunday to see what the fruits of my labor have yielded (or not yielded) for that week.  Look at the world through my eyes–the eyes of someone who has spent their entire life as an obese person.  Not just the last 10 years or so, but an entire 4 decades.  Live as I have lived, in this body that has never known being a normal weight.  Then get the opportunity to get to a healthy weight through having weight loss surgery after having tried every other method, have initial success, and then have it come to a complete halt.  The thoughts that will go through your head aren’t pretty, and meander toward self-destruction because every other time this has happened, you have given up.  You have thrown in the towel because you feel like all the hard work you’ve done simply isn’t worth it.

But giving up now is not an option.

It is not a choice that is on the table.  Not if I plan to get to my goal of 170 pounds.  I am trying so hard not to self-destruct.  I have to tell myself when days like today happen that I will NOT eat my feelings because what good will that do me?  I have to actively tell myself that I am worth more than the food I want to stuff down my throat, and that whatever perceived medicinal value that food might have, it will only make me feel worse than I already do. Self-medication with food got me to over 400 pounds and I don’t want to go back there ever again, so it’s time to find something else to medicate with that isn’t destructive or that will lead me to rehab.

I haven’t developed a good coping mechanism yet for dealing with these setbacks, but I need to, and in a hurry.  The setbacks feel more numerous than the successes lately and I need a healthy way to deal with them.

I’ve been playing this song on endless loop today.

This part in particular spoke to me:

I know what I need to do and where I want to be.  Now I just have to do it, and fight like hell to get there.

These last 90 pounds are fighting with me, and on days like today I feel like my capacity for fighting back is sapped.  Perhaps it is time to re-evaluate goals, set new ones, and hit the ground running.  I just hope that when I do, it’s not to stay in the same damn place.

Tonight I cooked something for my breakfasts this week.  I decided to give egg whites blended with cottage cheese a try: 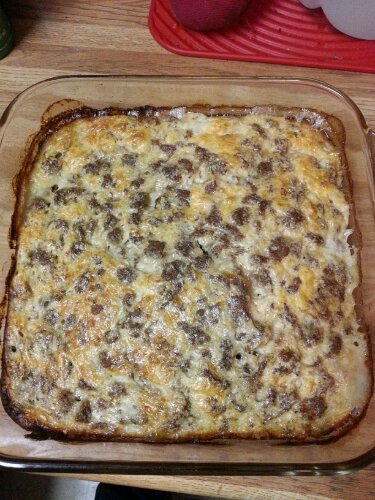 I used 8 egg whites, a cup of cottage cheese (full milkfat, so 4%), and a package of Jimmy Dean turkey sausage crumbles.  I blended the cottage cheese until it was smooth, then folded it into the egg whites, which I whisked.  I added a little bit of salt and white pepper too.  Then I mixed in the sausage crumbles, sprayed a small glass baking dish with canola oil spray and baked it for 55 minutes at 350 degrees.  I tasted it, and it doesn’t taste terrible.  But it’s got 18 grams of protein, 2 grams carbs, 5 grams of fat and 119 calories per serving according to My Fitness Pal.  Not bad.

Tomorrow night, I’ll be cooking some turkey breast cutlets.  I decided that this week I wanted to try eating less beef, and eat more fish, turkey, and chicken.  So my lunches this week are smoked turkey breast with pinto beans, my breakfasts have turkey sausage, and dinners (the ones I eat at home) are going to be seared turkey cutlets.