This week’s loss was a good one. I’m glad it wasn’t as big as the previous two weeks’ losses had been–I was actually getting worried about losing so much so fast!  Of course, losing 20 pounds in 3 weeks is still pretty freakin’ fast.

This is the first picture in which you can see both knobs of the closet doors on either side of me in my front-facing picture.  When I noticed this as I was putting together the composite, I got very excited.  It means my shoulders are more narrow, that I’m losing inches around my upper arms, and that perhaps finally, the next time I fly on a plane, I’ll actually be much more comfortable, and so will anyone who has to sit next to me.

This week I learned some important lessons about my new stomach and eating that I’ll be using this week and every week as I go forward.  This is Important Stuff if I am going to keep making forward progress.

I have the Jameson one-mile mosey at the end of the week which I am looking forward to completing.  The one-mile mosey is affiliated with the Jameson 5K, a race my university puts on each year to honor one of our alumni and to raise funds for a scholarship named after him.  I decided that this year, I would participate in the one-miler.  Since I will weigh 70 pounds less for this race than the last time I did one, this one should be much easier on my knees and body.  My goal for this one-miler:  finish in 25 minutes or less.  The last one-miler I did, I finished in a hair under 30 minutes. I think I can do it, because I get around so much faster now than I did then.  Having 70 pounds less to carry around this time helps a lot.  I have also decided that I will participate in the 5K that my school district’s educational foundation puts on as a fundraiser in the spring.  I don’t care how long it takes me to finish it, I just want to finish it.  This race happens in March, and I am hopeful that by then, I’ll actually be able to run, even if it is a slow trot.

This week’s focus:  planning meals (I’ve slacked lately) and being active each day (more walking and movement).  Just inching toward my December goal of trying to hit 270 pounds by New Year’s Eve.

Here’s what I had to eat today.  I’m craving beef this week already…must mean my period is on its way and that I need the iron.  According to my calendar it is, anyway.  My nutrition today was pretty good:  89 grams of protein today and only 33 grams of fat.  I did notice that I nibbled a lot today, but that was due more to the fact that I got up late and was busy all day.  I am not normally a nibbler. 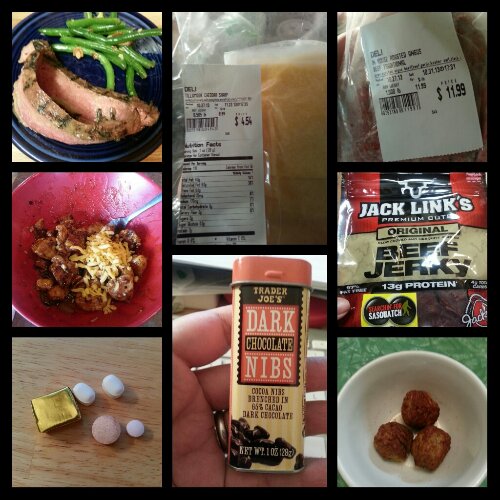 I did a little cooking and meal prepping tonight too.  I baked some honey barbecue chicken breasts this time (no photos, it’s just chicken) for my lunches and breakfasts this week.  Dinner tonight was from the chef’s case at the store:  honey garlic marinated flank steak and green beans almondine.  I packed the leftover green beans into some of the chicken I portioned out for my lunches so I’d have a green veggie to eat too each day.

Yesterday we went to a birthday dinner for a friend at an Italian restaurant in Dallas known for its pizza.  Of course you know we wanted pizza, but the whole crust thing right now is a no-go.  So I thought about how I could make something that tasted similar but that was sleeve friendly, packed with protein, and had better stats nutritionally.  Enter my version of the crustless pizza:

Crustless pizza: there are other recipes floating around out there that have a ton of fat and I was not down with that. This is the one I made.

Not going to lie, this made my house smell of AWESOME.  You’d have sworn there was an actual pizza in the oven.  I’d seen a couple of recipes for something similar to this floating around the VSG board at OH, but quite frankly, if a recipe has double the amount of fat for the amount of protein in it, it’s not worth eating.  In my opinion, it’s best to steer clear of it.  I don’t care if it’s called “low carb” or not, that much fat in a dish is not acceptable to me, especially when the amount of fat per serving is more than I generally eat in one day.

So I thought, what if I used chicken Italian sausage as my base, poured sauce on it, then pizza toppings like veggies and such, and then the cheese on top of that?  After talking about it with my husband, we agreed that olives would be our veggie of choice.  So I set about putting it together, and according to him, it is really, really good!  I am looking forward to having some tomorrow.

Preheat oven to 350 degrees F. Cook the chicken sausage in a large skillet and drain it. Lay the crumbled chicken in the bottom of a 10 x 13 glass baking dish and pour the marinara over it. Sprinkle the olives (or whatever your favorite pizza toppings are) over it, then the cheese. Bake covered for 30 minutes, then uncovered for 20 so the cheese browns up.

CORRECTION:  This made 12 4-ounce portions.

According to MyFitnessPal, for a 4 ounce serving, this recipe has 162 calories, 20 grams of protein, 3 grams of carbohydrate and 9 grams of fat.