This week’s trip to the scale was more than just a weekly measure.

This week’s trip to the scale was simply EPIC.

I was not expecting this week’s loss to be so great.  But it was.

I stepped off and on the scale multiple times to confirm that I’d seen the numbers correctly, especially the first number.  I seriously couldn’t believe what I saw.  The scale displayed numbers I’d never seen before.

For the first time in my adult life, I was seeing a 2 as the first digit of my weight.

My heart swelled.  I wanted to cry tears of joy but none would come.  I think the excitement I felt was greater than the joy and inhibited any tears that might have formed at the sight of the 2 on the scale.

After I got off the scale, I did the math in my head:  I’d lost over a hundred pounds.  In four months.  I couldn’t believe it.

It’s funny–I look at the composite above and that’s the only way I know that I’ve lost as much as I have, because I still don’t feel like I’ve lost that much. Again with the brain being a little slow on the uptake during this weight loss process!   Why is it that everyone else sees it but me?

I was terrified that after last week’s big loss of 7 pounds that I wouldn’t see a loss this week.  In fact, I was afraid I’d see a gain because in the past, whenever my body lost a large quantity of weight, weight loss slowed down or worse, stopped.  But this time, my body didn’t do either of those things–my weight loss accelerated.  I just kept doing what I’ve been doing all along:  eating between 800-1000 calories, with most days being around 900 calories; getting 80+ grams of protein daily; drinking 14-16 cups of water daily, and trying to get 6-7 hours of sleep a night.  I also see a therapist weekly and attend a weekly weight loss/lifestyle changes support group, both of which have been instrumental in helping me to be successful at this attempt at weight loss.  The surgery is merely a tool.  How you choose to work that tool determines your success.

I knew that if I was going to be successful at this that I’d need to have a holistic approach. Next on my list is to visit a PT to get an evaluation so that I can start being more physically active than just walking–one of my goals is to play golf and tennis again. But I need a physical therapist to evaluate my range of motion and to help me rehab an old knee injury before I think about doing either of those things.

I’ve got to grade a bunch of stuff, so I’m off for now.  Thankfully the grading period has just ended so things will calm down for a little while.  I’ll find time to write more later this week since I’ll have a little more time to do it.  In the meantime, here’s the Daily Bites for today.  Great protein day:  100 grams, even with the late start to the day.  Just had to make sure I chose good protein sources–chicken, shrimp, lean stew beef, and turkey. 🙂 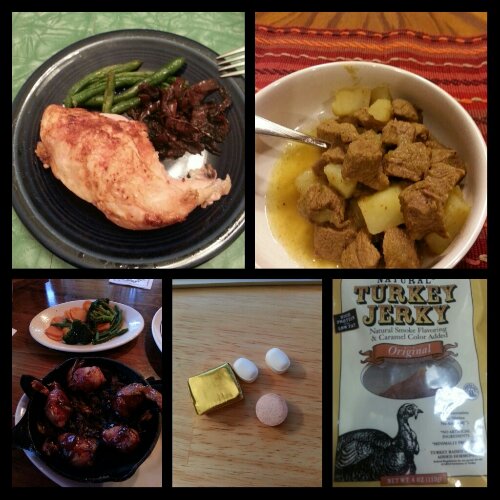