Tomorrow marks two weeks since surgery, and so far things have been humming along nicely.  I have not had any difficulty getting in my minimum of 64 ounces of fluids each day, I haven’t had any trouble hitting my 60 grams of protein goal each day, and I haven’t been plagued with the constipation that affects a lot of sleeve patients.  I really only had trouble with those things the first week out, so I am grateful that my recovery has been a pretty smooth ride so far. 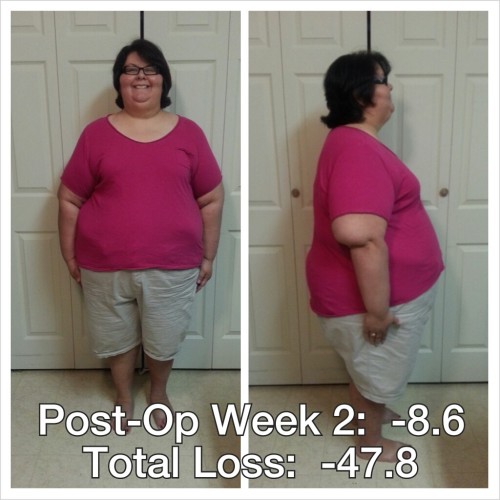 This is me, two weeks post-op. This week’s loss was a lot more than last week’s, which I’m excited about but not surprised by. I think last week I was still retaining fluids given to me in the hospital, plus my body was still recovering from the trauma of surgery.  A lot of the swelling in my abdominal area that I had as a result of surgery is all but gone, and the only pain I have left is still centered around that large incision on my left side.

I would have worn the shorts I have that are a smaller size but the waist of every pair of pants/shorts I own rests right on one of the incisions on my belly so I have to be really careful.  I elected to wear the bigger pair so that the waist would sit comfortably above the incision site.  Hopefully in a couple of weeks I’ll be able to wear the smaller pair without rubbing on the incision site too badly because it will be completely healed up.

My left side disfiguration is starting to subside, thankfully…I was really worried it would stay that way! I talked with a lady this week in our support group who also had Dr. Nick as her surgeon and she has the exact same weird indentation. And she’s a little further out from surgery than I am!  She also mentioned that her internal stitch that he placed to piece the abdominal wall back together had not yet popped.  When his PA came to see me in the hospital the day after my surgery, she had specifically said, “In about 2 or 3 weeks, you’ll feel that stitch pop and you should feel a lot better afterward.”  So that made me wonder if perhaps hers just hadn’t done that yet for some reason or other, and whether mine would do that, or if it had already done it.  The reason I think it may have already happened is that the other night I laid in bed on my left side for the first time since surgery, and I heard a pop.  I don’t know if that was it, or it was some other thing, but if that’s what it was, I don’t feel better.

EDITED TO ADD:  As a comparison, here is a picture of me before I began pre-op dieting on June 17, and me today. 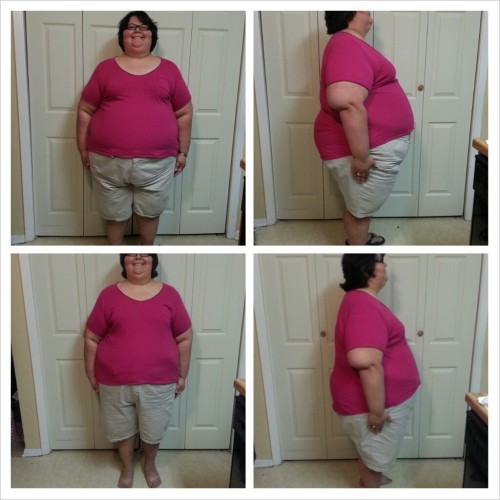 What a difference a month makes, no?

I’m focusing on staying hydrated and getting in at least 60 grams of protein a day. I’m going to try and push for 70 this week but it is going to be tough.  I did add back milk into my diet this week with no ill effects, which is good.  Then again, the milk I added back was lactose free and has more protein in it than most milks do.  The milk I am using to make some of my protein drinks is HEB’s Mootopia 2% milk, which has no lactose and 12 grams of protein per cup.  I’m drinking 2% because no matter how hard I try, I can’t choke down skim milk.  If the skim milk is blended into something, then that’s not so bad.  I just can’t drink it straight up.  I also introduced strained soups into my diet this week, which has been a godsend because they are savory and not sweet.  I am not adding protein powder to the soup broths because I’m getting enough protein from the drinks I’m drinking.  The broths are merely liquid that has a flavor that isn’t sweet which my palate appreciates.

I’m heading into week 3 of full liquids and I am tired of sweet protein drinks, and itching to eat FOOD.  I know people say “oh eat a sugar free popsicle because it lets you bite down on something” but I am really tired of sweet things.  I am not a sweet tooth to start with, and the past 5 weeks have been extremely tough on my palate because I am a savory eater.  Thankfully purees are next, and I never thought I’d say I was looking forward to blenderized ANYTHING.  I spent the other night pinning soup recipes that I could easily put through a blender so that I could fix myself small batches for the 3 weeks that I’m on purees.  Needless to say, I am really excited about getting to eat chili and corned beef hash, even if it is only 3 tablespoons at a time several times a day!

I’m also going to increase my activity this week–I haven’t been moving around much beyond walking because my left side is still pretty sore and walking jiggles everything so I wear my abdominal binder to keep that in check.  I’m going to try and play some Wii tennis, because when I play, I step back and forth constantly while I play and according to my Fitbit, I step back and forth about 2500 times in a 30-minute session.  Not bad in my estimation, and a pretty good calorie burn because I’m moving my arms as well.  I’ll have to see how my trunk handles it though since I do tend to twist a little when I play.

I have my first followup appointment this Wednesday at my surgeon’s office.  I hope to have lost a little more by then but I’m not expecting to have lost much.  As long as the scale continues to trend downward, I’m happy.