is my top speed, when I’m hoofing it.

I discovered this last weekend, when I participated in my first walk/run.

As a part of my 5 5k races before 40 goal, I decided to participate in a 1-mile Fun Run/Walk that was being held in conjunction with the 5k race.  My knees are torn up from years of being overweight, plus two knee dislocations and some torn cartilage, so running was out of the question.  I also thought it’d be a good warmup for the 5k I’d planned on participating in later this spring.

I arrived around 7 am to pick up my registration packet and to warm up.  I felt incredibly out of place among all the runners in their fancy tights and energy gels and Camelbaks, and thought holy shit, I am the fattest person here.  But I wasn’t going to let that negative self-talk deter me from doing what I told myself I would do:  finish the course in less than 30 minutes.

At around 7:55, all of us that were participating in the 1-miler gathered at the starting line, and at 8:00, they signaled the start of the race.  I was reminded of how much I hate being in a crowd at that moment–people all around me, too close for my comfort, all of them trying to push past and get ahead while I’m just trying to keep my footing.  Still, I started my heart rate monitor and chugged forward, determined to give this thing a go.

The path was a familiar one–it left from the athletic facility (aka “The Facility”) across from the campus I work on, around the back of the school and then back again.  I’d driven the path several times before, but had never actually walked it.  I tried to pace myself, and tried not to concern myself with how fast everyone else around me was walking/running–even the people pushing strollers were moving faster than I was!  Thankfully, I had music in my ears to drown out any ambient noise around me and to help me focus on my goal of finishing in under 30 minutes.

The further along the path I got, the more my knees began to ache and grind.  I could feel loose cartilage in my left knee, which has given me trouble for the past 17 years.  At one point, I nearly stopped the walk altogether because the pain was that great, but I pressed on.  I knew before I left the house that morning I would need to institute a pre-emptive strike on the pain front, so I gulped down 3 Aleve with my Powerade Zero.

As I passed the observers on the sidewalk, I saw an old friend from high school who’d told me earlier in the week she and her family would be there since her husband and kids would be doing the 5k.  I nearly cried, because at that moment I knew that there was someone else besides my husband who wanted to see me finish this thing. 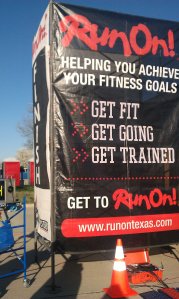 I got to the finish, and saw the throng of runners who were there to actually run the 5k.  I crossed the finish line, and my husband was there waiting for me with a hug and a proud smile.  I got my phone out of my pocket, saw the clock as I crossed, and snapped the picture of the finish as I walked across.  I wasn’t able to get the time, but the clock’s reading is permanently emblazoned on my memory:  29:04.

I’d done it.  I’d finished in under 30 minutes.  Something I didn’t think I could or WOULD ever do, I did.  And at that moment, I felt 10 feet tall and bulletproof.

A year ago, I would not have been able to make it across the street from the Facility, much less round the campus.

Two years ago, I could not make it from my car in the parking lot to my classroom without stopping halfway to rest, and getting extremely winded at the door to the building I teach in.

And now?  I can do a mile in under 30 minutes.  This may not seem like much of an accomplishment to the vast majority of people, but when you have lived nearly your entire life as an overweight couch potato, it is indeed something to celebrate.

I learned a few things that cold Saturday morning:

I was going to participate in a 5k down in San Antonio in May, but after this experience and the pain I was in for the 3 days afterward, I am going to give the 5k thing another go in September, when I’ve had a chance to lose some more weight.  I know dropping another 50 pounds will really ease the pressure on my joints and make the likelihood of me finishing a race without crippling pain much greater.  It may seem like the chicken’s way out, but I assure you, the pain tells me that it wouldn’t be a smart idea to attempt 3.1 miles when I can barely make it through a 1 miler.

In the meantime, I’ve decided that the only limitation to my participating in physical activity is my psyche, and whatever self-talk I engage in.  I’m trying to listen to my body and to the positive things my brain says about what I can do, rather than the things I cannot.

I will not talk myself out of those things that are physically possible for me to do.